God recently brought someone into my life that I am so thankful for. In just a short span of time, this gentleman has become what I would consider a close friend, a genuine friend. We have a lot in common, and that’s always a bonus. For instance; he has a great sense of humor, he loves to run, the lady in his life is way better looking than he is, he absolutely loves Jesus, and almost as important, he loves the Chicago Cubs!! I mean this guy is almost perfect. But, there is one thing that he has that I don’t! This one thing we don’t have in common, and I wish so badly I could just steal it from him, and then this one thing would no longer be his but mine. But it’s impossible, I will never be able to do that, and here is why, the thing that my newfound friend and brother has is a debilitating condition that affects his joints and at times, his ability to move about without excruciating pain. It came on quickly a few years ago and it left my friend struggling to just walk across his office. He has told me that at one point he actually had to be walked places because his ability to move about had simply stopped. I cant even imagine what that must have been like. I am pretty active. I really enjoy hiking and running, and I have practiced martial arts for the past 30 years. If tomorrow I woke up and I started to lose that ability how would I feel about that? What would my response be to that type of struggle? I know how I would like to handle it, how a Christian trusting in an all-loving, all-powerful God is supposed to act when trials and tribulations come, but at the end of the day I am simply human and I cant promise that I wouldn’t be angry, frustrated and feel crapped on. And I am certain that there were those moments in his life back then, that my friend felt those things. But his story seems to have a happy ending, at least for now anyway. You see God did an amazing thing that only God can do, he extended mercy and grace in the form of a pretty cool healing. This move of God in his life has allowed him to live an almost normal one as far as being able to move around and remain fairly active. Now it wasn’t a “complete” healing, but it was something extraordinary and at a time when his body was suffering immensely from the effects of his condition, God touched his body and my friend could walk and move about and not only move about he could run again…. and run is just what he started doing. So every Sunday, rain or shine, snow or ice, my wonderful friend can be found running. He runs what he humbly calls his 5-mile praise run, And for those 5 miles, whether the sun is shining or the rain is pouring, my friend is thanking God for what He has done in his life. I mentioned earlier in this blog that I would take this awful disease from my friend and I would put it on myself if it meant that he would never have to worry about it again and I meant it. I would “trade” him places. That’s what friends and brothers and sisters in Christ do, we bear one another’s burdens, we “take” those burdens on ourselves to help relieve their pain. Why do we do that? Its simple, because Jesus did that for us. He literally traded place with each one of us. The Bible says in 2 Corinthians 5:21  “For our sake he made him to be sin who knew no sin, so that in him we might become the righteousness of God”. Jesus took everything that I deserved, that you deserved on Himself. He took our sin, our rebellion, our sickness and He made it His own so that we could spend eternity with Him. My friend understands that truth, he realizes that our “temporary” struggles here on this planet, on this side of Heaven are things that God allows and it shapes us more into the image of Christ. I would trade my friend places tomorrow, because my new friend would do the same for me. And for that I am grateful.

Remember my friends, whatever is happening in your life right now, good, bad, ugly….God allowed it and its for His glory and your good. He loves you and there’s 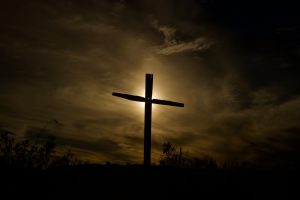 nothing you can do about that!!!